So back at the end of December, I blogged about my writerly New Year’s Resolutions. I basically promised to do this:

I also joined the Shenandoah Valley Writer’s Group 31-Day Challenge, because, well, those people rock and I wanted to rock with them. There I pledged, in addition to my goals above, to do this:

Yeah, well, I think you know where this is going. I failed. Big time. Days passed in which I wrote nothing beyond a FB status update or an occasional tweet. I did apparently blog 13 times in January, but considering 2 of those were cartoons and most of the rest were Flash Friday Fiction entries, I don’t think that counts. I haven’t touched my 2nd book, much less drafted any sort of query letter for the 1st one. I made it through the As and Bs of the RWA list of agents before I freaked out. And while I HAVE managed to read significantly more than I did in the fall, it’s not been any hour a day.

There a lots of reasons. A few legitimate, most not. I basically fell into a funk, into the familiar cycle of Not Do It – Beat Self Up – Feel Cruddy – Eat Chocolate – Not Do It Some More.

You’d think at 41, I’d know how to stop that cycle when I recognize it. I’m getting better at it, I suppose, in that at least I’m willing to see it for what it is and acknowledge it. I’ve been beating myself up for weeks. But guess what? Beating oneself up is just another form of procrastination, and a terribly useless one at that.

The temptation is to set forth a million new, more stringent goals. That’s what I always did when trying to lose weight, at least: I binged this week and exercised not at all? Well, next week I’ll only eat 1200 calories every day and I’ll walk 5 miles, etc, etc. The size of my tush will tell you that’s never been effective, either.

A wise group of people once told me if I’m not meeting goals, the trick is to make them EASIER, not harder. Break them down. Make them so accomplishable that I cannot fail. That keeps me out of the cycle, rebuilds my confidence, and allows me to make actual progress. It doesn’t matter if I’m moving at a snail’s pace – anything is better than standing still. And after all, I did subtitle that resolutionary post “Progress, Not Perfection.” 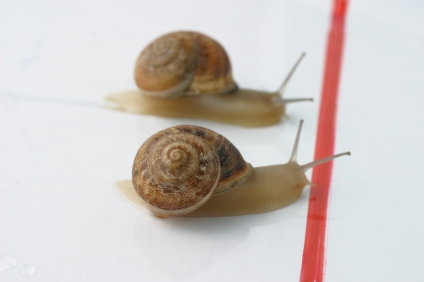 So let’s go back. I did not achieve every goal I set forth for myself in January. But perhaps stating I failed big time is not only unhelpful for my mental state and desire to move forward, but inaccurate. I did continue to write weekly Flash Fiction stories. I did read 4 books this month. I did look at agents at least a little. I did not stand still. There were days, perhaps, where I was stuck in a rut, but there were others in which I managed to crawl ever so slightly forward toward the goal.

Yes, I want out of the rut and back into super-productive mode. Yes, I need to face the demons that are dancing on my shoulders and keeping me from challenging fears and racing ahead. Yes, I need more sleep and less time playing that stupid Hay Day game.

And to get there, I need to make some smaller goals, not bigger ones. I need to be nice to myself. And I need to remind myself daily that ultimately my focus really is on progress, not perfection.

February is my new January. But I’m taming the goals a bit. Let’s focus on 3:

3. Keep looking at agents. Get a list of 5. This is doable within a month. And simple.

And if I come back in March and report I didn’t make those goals, well, I’m going to get up and try again. And you are welcome to kick me in the derriere, because ultimately, of course, if I want this, I. Have. To. Do. The. Work. Fears and procrastination tendencies and lack of sleep and real-life obligations will ALWAYS be there. I’ve got to do it anyway.

I can do this, right? Write.

Tell me, what do YOU do to get yourself out of a self-defeating funk?