I’ve always loved Europe and European history. I’ve never been sure why. Such a Western-Civ centric focus isn’t exactly PC these days, but it’s where my heart lies. In my younger days, however, I concentrated my attention on Germany and the German language, not Britain and English. I dabbled in occasional English courses alongside my medieval history studies and thoroughly enjoyed reading the Arthurian legends and other English works in my college/grad school years. Visiting the UK was on my list of places I wanted to see, but it had always been prioritized below Germany and Italy. I’d never felt as called to England as I have in the last few years.

Why now? What had me salivating over the thought of London, of Mayfair, of Hyde Park, of St. James? I’d read about those places numerous times in the Regency romance novels I adored, and while somewhere in my brain I knew they were real, they had existed in a sort of fantasy realm, just like the characters in my beloved books; people and places that felt somewhere between real and not real.

What changed? Two things: 1) I decided I was going to finally write Regency romance, not just read it, and 2) I really, really wanted to see Colin Morgan (of Merlin fame) in a play. The second actually happened (woo hoo!) and I wrote a long, rambling blog about it. The first I’m in the middle of – literally. I’ve written one romance, a contemporary, but the second, of which I’ve cranked out two-thirds of a draft, is set in England in 1812. And it’s been no surprise to me to realize that reading about Regency history and events and fashions and customs is quite a bit different, and loads easier, than writing about it.

To write convincing historical fiction, an author has to be well-versed in the history of the era in which they set their story. That’s a no-brainer. And as an academically-trained historian, that thought excites me – I LOVE history, love reading it, love trying to imagine what it was like to live in various places and various times throughout history. But it’s one thing to play pretend in my mind, and quite another to feel competent enough to write historically accurate and believable stories. I know of places like Almack’s and Covent Garden, have read of spencers and half boots, know that drinking and gambling and horse racing were popular with Regency bucks (not much has changed on that front, I guess). I’ve heard expressions like “9 days’ wonder” and “a diamond of the first water.” Hearing the vocabulary and reading of the time period and being able to successfully weave them into a story are proving, however, to be two quite different things. 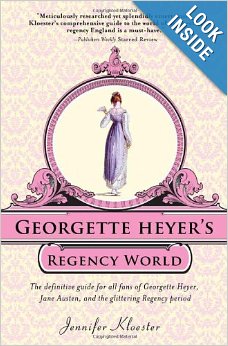 When faced with any challenge or problem, my first instinct is to delve into books. What an ideal thing to do in terms of Regency research! It’s been fun amassing a Regency library and working my way through The Mirror of Graces and Jennifer Kloester’s Georgette Heyer’s Regency World – but I’m still left feeling as if it’s not enough. I haven’t learned enough. I’m struggling to absorb the events and practices and trends, etc., well enough to feel qualified to write about them, and I tip my hat to authors such as Sabrina Jeffries, Julia Quinn, Eloisa James and numerous others and all the research they do to make their works sound effortlessly believable. Because it’s certainly not without a great deal of effort.

Reading all these books and stumbling across names like Vauxhall and Beau Brummel and Carlton House and White’s Club… it kept hitting me. How could I write about these places if I’ve never been to England and never set foot in London? Sure, I know plenty of authors never visit the places about which they write; one mark of a competent storyteller is the ability to realistically portray people and places, times and cultures, whether they’ve been there or not. I’m still feeling incompetent.

So even as I rejoiced when my husband took me to Nuremberg this spring (he was presenting a paper at a conference; I was along for the German experience), a big part of me was wishing it were London. Guiltily wishing–I mean, really, I got to go to Germany, people! But I wanted to go to London – I needed to go to London – before I felt my stories could be as rich as I want them to be. Before I felt I could truly have a sense of Regency England – or at least as true as sense as anyone trying to envision an earlier time. Evidence of past times are all around us, of course, but will I ever be able to grasp what it was like to live in the era before modern transportation, before electricity, before central heat? Before many of the privileges and advances we take for granted? I don’t know. I try. I think that’s why history has always called to me – that desire to understand what it was like to live in ancient Rome or medieval Germany or Georgian London, while knowing full well I never really would/could, that my own experiences and upbringing and culture and customs necessarily influence how I read the past. Historians aim for objectivity, but the challenges of that are immense.

I didn’t think London was within the realm of possibility, though – at least not this year, considering I’d already been overseas once, and had also had the opportunity to go on my own to visit family and friends in the midwest during the summer. Two big trips in the space of four months was a lot. But in September two of my good friends started talking about going to see Mojo, the play in which Colin Morgan was currently acting. In London. LONDON! I wanted to go SO BADLY. I could kill two birds with one stone, I reasoned – see the cutie from Merlin AND get some Regency research done! Win win! Only… it would be expensive. Really expensive. And could I really take off on my husband and kids again?

Turns out I didn’t have to make that decision. My husband had been planning a trip to London all along! He had been trying to keep it a surprise (sorry, sweetie!); he’d submitted a paper to a conference scheduled for November and had been waiting to hear confirmation of its acceptance when I really began ratcheting up the London talk. At that point he fessed up that we were going. He’d listened to me all summer – indeed, all year and even while in Nuremberg – talking about my desire to go to England for research purposes. And here he was, making it happen without even telling me. (Did I mention he’s earned Husband of the Century several times this year? Especially since he not only took me to London but ALSO stage doored with me and videoed me meeting Colin Morgan… oh wait, that’s in the other blog.) 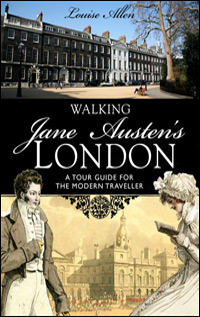 We wouldn’t be able to stay for long–the demands of his academic schedule and the desire not to overload the grandparents with childcare responsibilities necessitated that. But I didn’t care. I whooped and hollered and gave him kisses. At least I think I did – I was so excited I don’t really remember. Five days. We could stay five days and four nights. He even agreed to stay in Mayfair, despite the expense, because he knew I wanted to be in the thick of it Regency-history-wise, wanted to walk in the steps of the ton, explore Grosvenor Square and see Bond Street and look at Nash’s architecture, without having to travel more to do so.

I, of course, immediately ordered about 3-4 London travel guides from Amazon, and read them all. Cover to cover. If I was going, I was going to be prepared, and I was going to cram as much into this trip as I could. I knew it wouldn’t be enough – just a few days – but I was going to take what I could get, I was going to appreciate it all, give thanks for it, and run around London like a mad woman, trying to absorb as much as I could.

That’s exactly what I did, and that’s exactly what this series of London blogs will chronicle: one middle-aged mom and romance writer’s experiences visiting London for the first time. Perhaps it will entertain no one else except me – an author’s nightmare. But if nothing else, it will chronicle for me and hopefully keep fresh in my memory all the sights and smells and sounds and feelings being in London evoked. And there were many of all of those things. It was brilliant. Brilliant.