Can you believe that I actually considered skipping the Tower of London as I was planning out our itinerary? We only had four days, after all, and I was trying to focus as much on Regency era things as I could…

However, the medievalist in me insisted it just wouldn’t be right. How can one go to London and not see the infamous tower, the earliest parts of which were built by William the Conqueror in the late 11th century?!? Plus, I reasoned, not only did 21st century tourist me want to see the Tower, but I was sure 19th c Regency folk would have, too. Therefore we HAD to go. I’m so glad we did.

Although we were leery of venturing off to the Tower on a weekend, Sunday was the day in which it best fit with our plans. Surprisingly it wasn’t overwhelmingly crowded when we got there, although there were numerous people, to be sure. The crisp blue sky and delectably cool temperatures (and lack of rain!) made it an ideal day for perusing centuries of history.

I snapped a picture immediately upon emerging from the Tube stop – but the bright sun, which was so great in many ways, made it hard to get good shots. We also stopped briefly to look at the Roman Wall – one of the last remnants of the original Roman wall built in the 3rd century A.D. that had encircled Londonium. It was just so exhilarating to think of the history right under our feet, right in front of us – and to know that the Romans had trod upon the very places in which we stood.

The Tower is certainly impressive-looking. I love, love, love medieval castles and anything built out of stone, so I was gasping with delight as we walked along the Tower’s edge. I knew the Tower had played a key role in British history, obviously, but will admit to doing a little bit of reading once back home to refresh my memory. Control of the Tower often went hand-in-hand with controlling England, and battles between kings and barons for it were common in the medieval period. Throughout the centuries kings and queens took refuge in the Tower to avoid capture/being overthrown. It had actually been the royal residence in its earlier years, but by the 16th century had declined enough to mostly be used as a prison or for other government duties, but not as living quarters for the royals.

We opted not to take a formal tour, which I now rather regret, figuring that we were pretty tired at this point and didn’t want to wait around for a tour to start; we’d rather take the map and strike out on our own. However, we hardly needed the map – all we had to do was follow the people in front of us as we wove in and out of towers in an orderly procession.

In spite of all the tourists, and even in spite of knowing many parts of the Tower had been restore/repaired/redone in the 19th century, it was amazing to stop and try to picture the people who would have walked 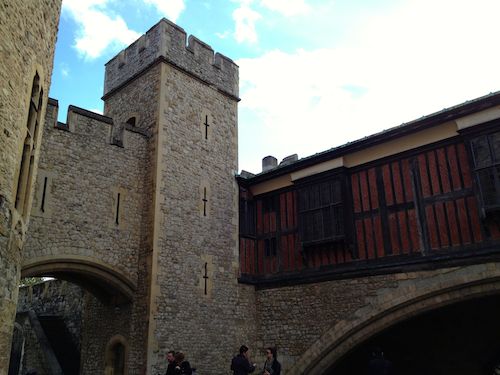 where I was walking, centuries before me. William the Conqueror. Richard the Lion-Hearted. Walter Raleigh. Henry VIII. Anne Boleyn was executed here in 1536. The Princes in the Tower had found their untimely end here in 1483. Although the Tower’s reputation for torture and executions has apparently been greatly exaggerated, it was still sobering to think of all the people who had been held there, who had been tortured there, who had been executed there. It was still awe-inspiring to think of all the major figures in history who had wandered through the same places that I was wandering, who’d slept within the halls of the tower, who’d lived their lives in times so different from our own it’s often difficult for me to try to even comprehend. 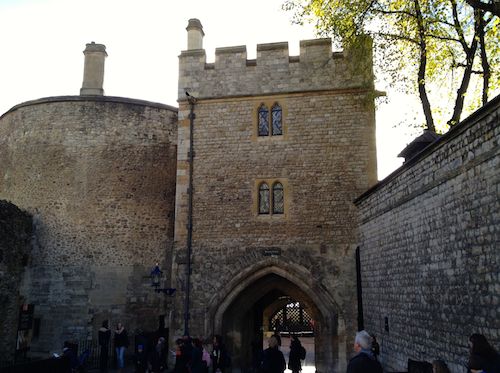 Here we were, 21st century tourists, roaming freely throughout a place that in centuries past would have been limited to a certain segment of the population, would have been feared and hated, would have dealt continuously with the threat of attack. We could touch the walls of the prison cells, admire the armor worn by soldiers of times past, see the Crown Jewels… I don’t know, it all just felt amazing, to realize we were walking freely and safely in an area in which for hundreds of years that wouldn’t have been possible, especially for a commoner like me. 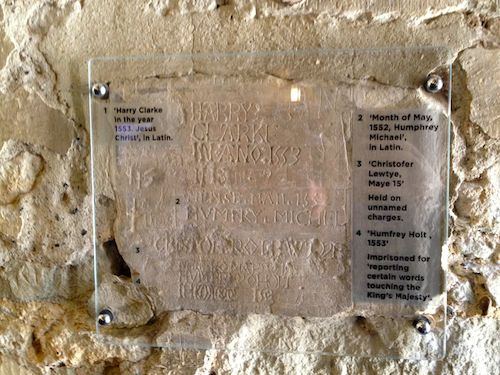 We strolled along walls and through various towers. Some had been living chambers, some prison cells. Seeing the “graffiti” carved into the walls by people who’d been held there in centuries past was quite moving to me. I stood still a few times, trying to picture men and women laboriously carving evidence of their existence – and imprisonment – into these very walls. Did they know that 500 years later people would be poring over their etchings?

After walking through a tower which held replicas of many of the royals’ crowns (sans real jewels, of course), we found ourselves in the inner courtyard, and could see a marvelous-looking stone building that we soon figured out was the Waterloo Barracks, built in 1845, which currently houses the Crown Jewels display. We were apparently quite lucky to get in line when we did – we walked right in the front of the building, although we could tell from the metal queue guides, and the comments of the people around us, that the line often extended way out beyond the building and wait times could soar to more than an hour. Still, once inside it was a long, slow process of shuffling ahead. The Tower has done a marvelous job of creating multimedia displays, however, for people to watch and listen to while waiting to actually get to the Jewels.

And what did we think of the Jewels? Everything was impressive, but not as wowy zowy as I had expected – maybe in part because it was hard to get a good look at much, since there were SO MANY PEOPLE in there and the line had to keep moving forward steadily. I also kept hoping to find the spot where Moriarty put on the royal regalia in that episode of Sherlock (it was the Reichenbach Fall, wasn’t it?), but never did see anything that looked exactly like the glass case in which he had sat. I guess this just means I need to watch the episode again.

After touring the Crown Jewels, we went into the White Tower itself, the central and oldest part of the Tower complex. It was the first stone keep in England, built under William the Conqueror himself, starting around 1078. Now it houses a huge collection of armor, as well as educational displays about the Tower compound. I learned that the Royal Mint, now in Wales, had been housed in the Tower itself for centuries. I also found a pretty awesome-looking steam punk dragon, although I have no idea how it fit into anything. I didn’t care – it was cool. 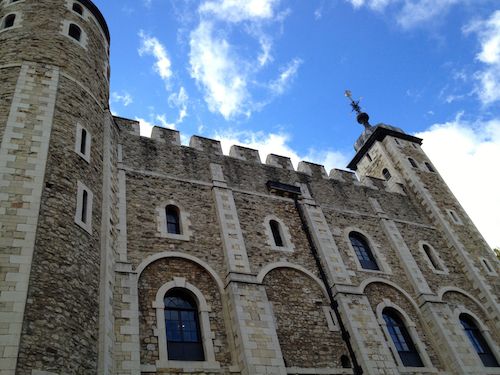 Outside as we wandered around we often noticed metal wire sculptures of animals. These, we learned, were to remind people the Tower had also housed a menagerie (fancy word for zoo) since medieval times. Medieval kings often received unusual animals as gifts, and polar bears, lions, and even elephants had once roamed the Tower grounds. According to Wikipedia,

“By the 18th century, the menagerie was open to the public; admission cost three half-pence or the supply of a cat or dog to be fed to the lions. In 1828 there were over 280 animals representing at least 60 species. The last of the animals left in 1835, relocated to Regents Park, after one of the lions was accused of biting a soldier.”

You can bet some of my characters will end up there in future Regency books, although I’m hoping they forgo the custom of supplying household pets as a meal.

All in all, visiting the Tower was a very satisfying, moving experience, even as my feet were now loudly proclaiming their fatigue, along with the rest of me. 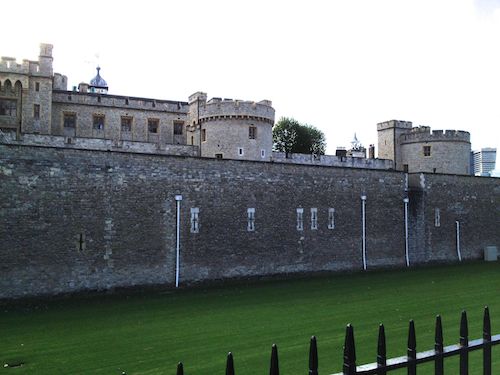 We thought about roaming around The City, as the central square mile of London proper is called, or visiting Tower Bridge (hubby did snap a pic of me standing on the Tower walls with Tower Bridge in the background), but frankly we were exhausted and decided the next thing we needed to do was check into the hotel and crash for a quick nap.

Later that evening we went back down along Piccadilly to the theatre area, and grabbed some pizza at the Pizza Express on the corner of Haymarket and Panton (how American sounding, but they had pizzas on the menu that were different from the kinds typically seen here. I ended up ordering a sloppy joe pizza – spicy, but good!). No Colin Morgan sightings (for one thing, it was Sunday, and I knew Mojo didn’t run on Sundays), but it was a great way to end a wonderful first day in London.

After admiring a bit of London at night (since it got dark quite early there), we were happy to hole up in the hotel and plan out the next day… and sleep some more!