Can you imagine how excited I was to round the corner and there it was, its twin towers reaching to the sky? Westminster ABBEY, baby! And yet… my first thought was, it’s smaller than I expected. How silly is that? But it’s true. I’ve been blessed in my life to have visited some spectacular cathedrals in Germany and Italy, and I just assumed this one would dwarf them all in size. It didn’t – at least from my opening view approaching the western facade.

Still, there’s no denying it’s a gorgeous building. I often try to imagine what it would have been like to live in the eras during which these gargantuan churches, these enormous

cathedrals were built. We’re so used to skyscrapers now, to big, fancy buildings that soar numerous stories above us. Many of the buildings in the west end of London felt that way to me – huge stone edifices looking down on the ants wandering about below. But to see these religious houses in a time during which most other buildings would have been only a few stories high, if that? And built out of wood? How could you NOT believe in God in the face of such grandeur?

Yeah, yeah, I’m venturing into purple prose here, but truly, that’s how the medieval churches always strike me – places of beauty, of immense power, of a different kind of air, a holy air. I love them, and seek out these grand cathedrals whenever I get the opportunity (not many options for that here in Virginia).

I admired the outside of the Abbey for a while, and the buildings around it. I don’t even know what all of them were, since none were labelled on my simple map, but I liked the one to the side of the Abbey. Working my way toward the Abbey entrance, I could see that a line had formed, but it didn’t look too bad. I walked back to its end and found myself staring at the backside of Parliament, although it took my idiotic American brain a few minutes to figure that out (Big Ben helped a lot)! So many icons so close together – the history geek inside me was once again going nuts. 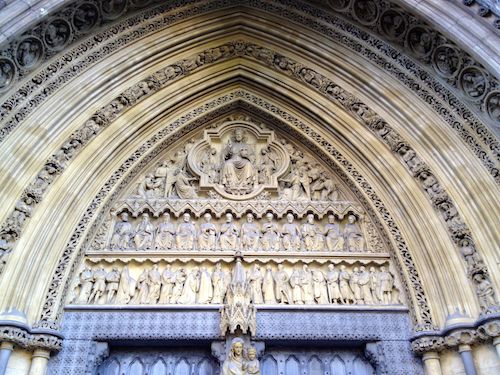 As I waited, I snapped a few pictures of the outside of the Abbey, and particularly enjoyed the carvings over the front entranceway. Again, I tried to imagine the people who had actually built the church. Not just the master carvers whose finished work we admire, but the people who laid the basic stone. What were their lives like?

Inside the Abbey photography is not permitted, so I have no snapshots from there. But like the multitude of other tourists milling about, I partook of the free audio guide and strolled around the Abbey in the prescribed fashion, admiring the architecture, particularly the black and white floor, and listening to history in my ears. 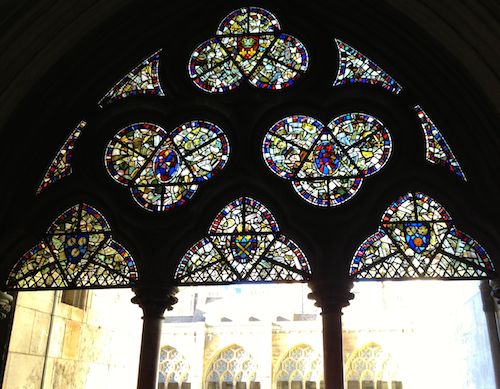 Truly, there is so much to see inside that it’s overwhelming. So many famous people buried there – kings and queens (Elizabeth and Mary!), Chaucer, Isaac Newton, Darwin… truly humbling and exhilarating at the same time to be sharing the same space with them (so to speak). I meandered around, trying to soak it all in. After making my way through the interior, I walked along the inside courtyard and back to a small museum that housed original clothing of famous Britons, including Admiral Lord Nelson. 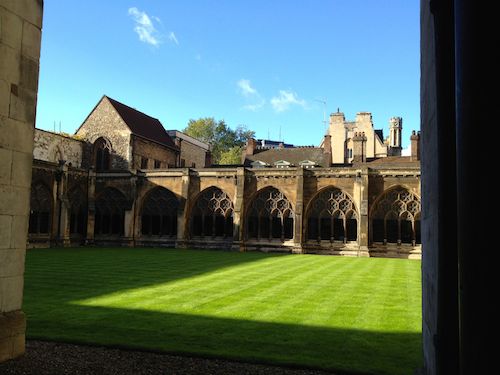 I wanted to admire the peaceful inner courtyard, and did take a few pictures. But I was also on a deadline, since I needed to head over to the Victoria and Albert museum while I had the chance, before my husband returned from his conference. So reluctantly I left the Abbey behind, made a quick stop in the gift shop to get small items for my kids, and headed off north to the V&A.

In hindsight, I wish I’d spent more time in the area. Then again, it was clear I wasn’t going to have time for everything I wanted to do. Not nearly. I was also sorry that my husband hadn’t been able to come with me. I know he would have liked it. (He was sorry later, too, because what I DID drag him on were more Regency walks – but that’s coming up in a future installment…)