Next we caught the Tube to St. Paul’s. Upon emerging from the Tube exit, we were looking around for the cathedral, but didn’t see it initially. We spied some sort of smaller building, but were sure that couldn’t be the church. Hubby then turned around and laughed, because tucked down the street between the tall buildings was our first peek of St. Paul’s – and it was definitely not small. 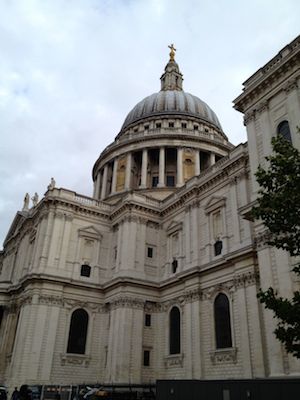 St. Paul’s is magnificent. I’ve always loved the huge medieval cathedrals – there is something about them that just sings to me. The architecture, the artwork, the religious devotion inspiring their construction – all of it works something in me whenever I step foot in one. I loved St. Paul’s. No pictures were allowed inside, but that’s OK – I was too busy gawking over its grandeur to worry much about that.

One of my goals I had set before even arriving in London was climbing the stairs in St. Paul’s to its top. All of the stairs. There are 259 of them. I know for many people this is no big deal, but I’m not exactly a small woman, a young woman, or a woman in particularly good shape. At least I had the good sense in the month and a half before our trip to kick up my walking regimen, getting up to five miles a day before we left. I’m sure that’s why I actually made it to the top of the Cathedral, but it wasn’t easy going. Brett and I stopped in the whispering gallery, and then climbed the additional steps to the very top. The view of London was fantastic, and I can tell you every step of that climb was worth it.

As I stood at the top, I tried once again to imagine what it must have been like for people from centuries past to stand in that same place and look out over the city, especially considering the other buildings would have been much, much shorter. In truth I have no idea if people in the Regency period were allowed up in the Dome the way we are today. I assume so, but I suppose I need to look into that. If they were, I guarantee you a future hero and heroine will spend time whispering to each other across the Whispering Gallery, and then will steal kisses while surveying the city from upon high. 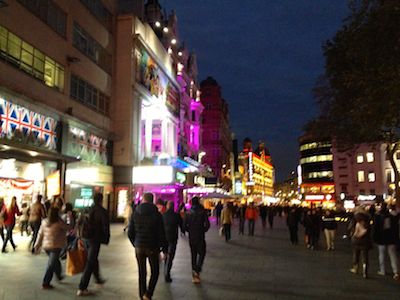 Heading back to the hotel, we chilled out for an hour or so before walking down to Leicester Square. I’d booked a table in a Mexican restaurant on the Square – sure, a total tourist trap, but I was trying to appease my husband with Mexican food, since I was about to drag him to a play in which he had no interest so that I could ogle Colin Morgan.

We were amused by the idea of a “Mangarita” listed on the menu, so hubby ordered one of those, while I ordered the regular frozen version. Can you tell which is which? 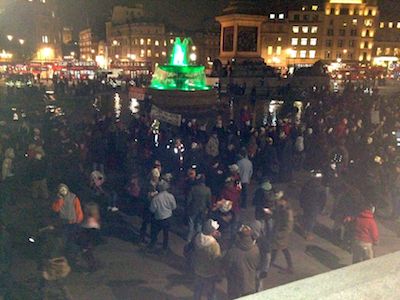 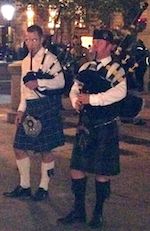 We still had a bit of time to kill before the play, so we wandered around Leicester Square and back down to Trafalgar Square, where we stumbled across some sort of protest – and two bagpipe players. It was delightful to stand among the hub-bub of the evening and take in all the people – and the lights. I took a pic of the National Museum in the background, and lamented that we would not be able to go in it on this trip. We wandered back over toward the theater, and I was delighted to see Her Majesty’s Theatre and the Royal Theatre at Haymarket along the way.

Then it was showtime, baby… on to Mojo, seeing Colin Morgan, and what would become what I dubbed the Best High-Five Ever! You can read all about that adventure here.