I’ll admit that I was mostly excited for Day 3 of our trip because we would be attending Mojo the play – and seeing COLIN MORGAN!! – that evening. But I was also fired up to visit the world-famous British Museum and St. Paul’s Cathedral. Even hubby was pretty excited, as, like me, he loves museums and large cathedrals.

Unfortunately, the day dawned gray and rainy. Although given it was the first time we’d had rain since we arrived, I shouldn’t 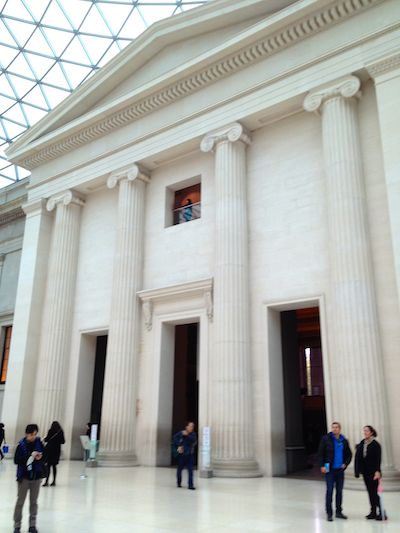 complain. Plus we had mostly indoor activities sketched out for the day, so besides being a bit of a mood dampener, the rain didn’t deter us. Upon arrival at the museum, hubby and I immediately split up – I wanted to search out any Regency-related artifacts I could find, whereas hubby headed to the Greek and Roman displays. Sadly, many of my pictures didn’t really come out, but I enjoyed examining Regency jewelry and buttons and watches and clocks. There were fewer items from the early 19th century than I’d seen at the V&A, I think.

After the Regency displays, I sought out the medieval sections of the Museum, still feeling affection for my former area of doctoral study. I loved studying the various artifacts. I stumbled across a display of pocket watches and clocks, and also one of money. It was fun to search out those from my period of interest, but also to see pieces across time and geographical space. and eventually found my way over to the other side of the Museum myself, in which I looked at ancient Greek vases (and thought of my step-dad, long a classical Greece enthusiast), then raced through rooms full of marble statues as I sought out the mummies. My favorite was the cat mummy display. 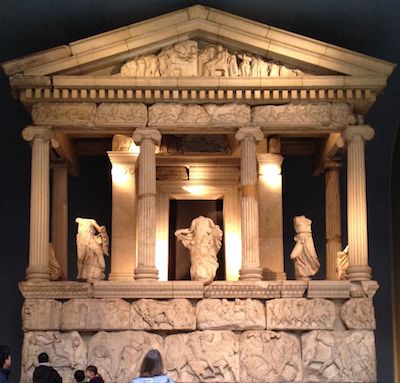 Unfortunately I ran out of time – we knew it was going to be a time-crunched day with all we wanted to do, so we’d agreed to spend only two hours or so at the Museum. Two hours are not enough – not nearly enough – to see everything. I know there were numerous displays I’d missed, but frankly I was happy (and a bit overwhelmed) with everything I’d taken in that morning, so after zipping in briefly to see the infamous Elgin marbles and a few other ancient items, we headed out in search of some lunch. 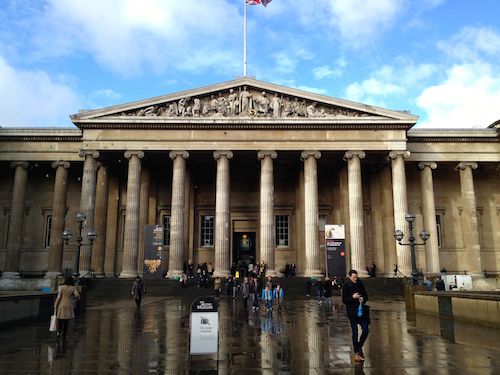 It had stopped raining by that point, so I took advantage of that to snap a few pics of the exterior of the museum. We wandered briefly around the neighborhoods near the museum, searching for a Greek restaurant, but ultimately ended up at a chain pizzeria – the same chain at which we’d eaten the first night. Whatever. I didn’t care, and it’s what hubby wanted.

After a filling lunch, we walked to the Sir John Soane Museum. Hubby totally indulged me here, as I’m sure he wasn’t particularly interested in this Regency architect’s home. I was, though, as John Soane bequeathed his home and its contents to the England, and it is essentially an extant – if a bit unusual – Regency house. Pictures inside were not allowed, but I still enjoyed seeing the various rooms, and bought a guidebook so I could later remember the interior. Sir John Soane’s home lies directly across from the Lincoln’s Inn Fields, another large, beautiful green space in London, so I snapped a quick pic. Had I been on my own, I would have lingered much longer in the home, but I could tell hubby was chafing to get over to St. Paul’s…so off to the Tube we went!