I ended up axing this scene from A Matter of Time. While the less ideal realities of the Regency period are certainly worth considering and not glossing over, my editor and I ultimately agreed that this exchange, while thought-provoking, did not do enough to further the love story. Do you agree? 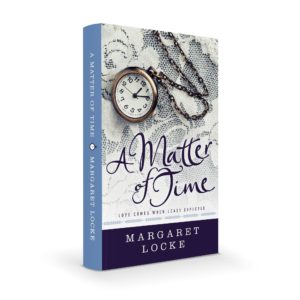 Eliza is talking with John Sayers, Clarehaven’s hounds master, in the kennels:

“I forget people here are used to being treated less equally than in America.”

“Servants in America stand eye-to-eye with their masters? Do you think your slaves would agree?” The hound master’s eyes pulsed with some hidden emotion.

Eliza flinched. Slavery had always been a historical reality, not a current event. But right now, in this century, across the ocean in her beloved home state, people owned slaves. It was incredibly unsettling. Racial issues still cut deeply across the fabric of the United States in the twenty-first century, no doubt, but slavery…. It, at least, had always been a thing of the past. The long past.

“You are right,” was all she could think to say.

“Indentured servitude is not much better. My father’s brother sold himself to an American for five years. He wanted a chance in the new world but hadn’t the means to travel and establish himself there.” John grew silent.

“The American claimed my uncle died from sudden illness. But my uncle was a hale and hearty man; I find it hard to believe he would have died after only six months . . .”

“I am so sorry for your loss.” Eliza wasn’t sure what else to say. No wonder he’d reacted so strongly to her assertion of equality.

It was painful to wrap her mind around the less appealing realities of this era, even if she knew laws would eventually change. That knowledge didn’t help the people who’d suffer over the next fifty years and beyond, though.

It’d been easy to ignore the bad stuff, especially in her romance novels. There, it was all glitz and glamour, all alpha males with deep pockets and daring females ready to challenge the world—the perfect escape. But that was fantasy. Most women in this time period would never have the opportunities she’d had in twenty-first century America. And even though social injustices certainly abounded in her day, modern-day world citizens would think many of those here unfathomable.

Factories were coming, factories in which children would work longer days and harder hours for less money than many minimum-wage workers in her time—and she knew from bitter experience how hard it was to live on those earnings.

Women across social classes had few opportunities available to them beyond marriage. She didn’t even know much about how the lower classes of women lived here. Austen’s works largely centered on the gentry, and Eliza’s treasured romance tales featured dukes and viscounts and earls, not butchers or bakers or candlestick makers. Much less seamstresses, housekeepers, or prostitutes.

Eliza wrapped her arms around her middle, chewing on a fingernail. “Does the Duke—does he ever mistreat servants?” Dev didn’t seem the type, but still.

“No. His father did, though. Many of us have proudly served the Claremont family for generations, but we were glad to see the old Duke go. He was demanding and prone to calling for physical punishment when errors were made.”

John smiled. “Don’t let the Duchess hear you say that. Although she interceded at points when he wanted to beat the women or children.”

“She did?” Eliza tried to imagine the Duchess soften for anyone.

“She is ferocious when need be.”

Don’t I know it. “Did the current Duke and his father get along well?”

Mr. Sayers pinched his lips. “I have said too much, my lady.”

No, no, don’t stop now. I need to know everything.  “My apologies. I did not mean to overstep bounds.”