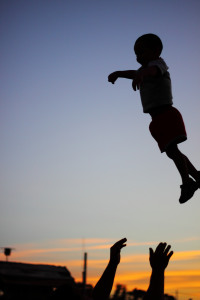 The wind whipped so fiercely it nearly tore the photo from his grasp. He looked at it one more time, longing for when his father used to throw him like that, the blind faith he had felt even as frissons of fear snaked through his limbs. Dad had caught him, though, every time.

That innocence was gone now. His father hadn’t been able to save him from everything. The broken heart. The drugs.

Tucking the picture into his pocket, he peered over the ledge. Dad seemed so far away.

“I love you, dad,” he shouted. Closing his eyes, he jumped.

He waited as long as he could before pulling the ripcord, relishing the air rushing against his body, making him feel alive in a way he hadn’t felt in forever.

Let me know what you think of my entry in this week’s Flash! Friday Fiction contest. Word limit this week was 150 words.

Also, do I get bonus points for such an alliterative post title?