Woo hoo! It’s Writer Wednesday! Everybody dance! Er, or, not. But I AM excited to have Phyllis Duncan with us today, as she is a fellow member of my beloved Shenandoah Valley Writers, and the first SVW friend I ever met in “real life.” (I still claim online life is somewhat real, but that’s a different discussion.)

Phyllis writes spy tales – and, most recently, a spy love story (hooray!). So settle in and get comfortable (but not too comfortable – you never know who’s lurking around the corner) as Phyllis shares a bit about herself and her TWO brand-new releases, My Noble Enemy and The Better Spy.

Just about anything in contemporary history (Cold War to the present), even current events, but mostly I write about injustice and the rendering of justice, even though the means may be morally questionable. That’s why I love the espionage genre—the “real” stuff, not what you see in James Bond movies. Spies lie, cheat, deceive, and worse to save lives or achieve what they believe is a preferred outcome—depends on which side you’re on, though. I’ve always enjoyed exploring morally dubious characters.

I was named the Cutest Baby East of the Mississippi a long, long (long) time ago, but that was before I cut most of my long hair off one day in Sunday School.

I don’t normally write romance, though I refer to my recently published novella as a love story. I also don’t normally read romance, except for J.D. Robb and Janet Evanovich—and now Margaret Locke!—and I use Robb and Evanovich for my escape-reality reading. My all-time favorite romance is, without question, Jane Eyre. My parents sent me to a Christian school for a couple of years which reminded me of Lowood (and I’m not being figurative), so I identified with the young Jane’s tribulations deeply. (Hmm, perhaps the start of my interest in reversing injustice?) That unlikely love story between Jane and Rochester is timeless and gives you hope for a happy-ever-after. A lot of what I write doesn’t have a happy ending, so I always go back to Jane Eyre. I’ve probably re-read it a dozen or more times in my life, and I’m sure there are more re-readings of it to come.

(ML: Aw, shucks. I’m delighted you read A Man of Character, and hosted me for an interview! I’m one spoiled author!)

Here’s the blurb for My Noble Enemy: 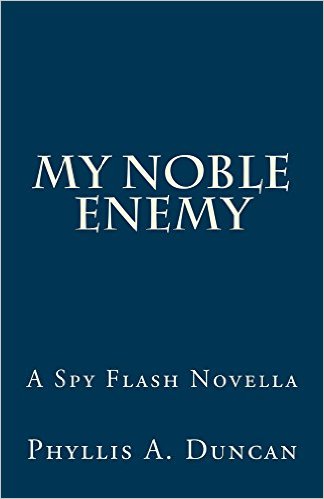 Edwin Terrell, Jr., has enjoyed his life as a consultant after leaving the CIA. He lives comfortably, has amassed a decent stock portfolio, and, even though he’s in his sixties, he can look forward to years to come, increasing his net worth. That is, until a diagnosis forces him to face the end of his life sooner rather than later.

He finds himself in The Hague, where his former lover, Mai Fisher, works for the U.N. War Crimes Tribunal. Terrell wants to die on his own terms, and he wants Mai to see to that. The only problem is, years before, Mai’s husband, Alexei Bukharin, had declared her and Terrell’s now-platonic relationship off limits.

Mai, however, will not let her friend die alone, even if it means putting her marriage in jeopardy. Terrell abandons his plans to go to a French hospice and intends to spend his last days with the woman he could never have. Alexei soon realizes the only thing keeping the dying man alive is that Mai won’t let him go. To honor the friendship he and Terrell once had, Alexei has to convince her things need to end, now.

In the midst of a dying relationship, a possible new one gets a start in an unlikely place, and old enemies may or may not resolve their differences.

And here’s the blurb for The Better Spy, releasing on Kindle July 28th, 2015! 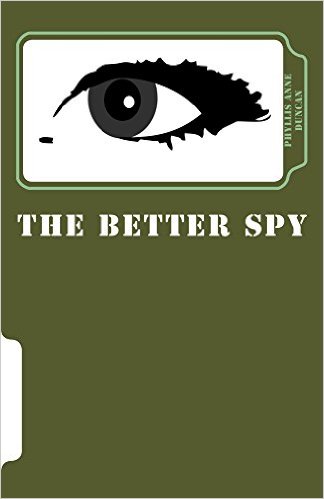 The defining mission of UN covert operative Mai Fisher’s career came in the mid-1980s when she went undercover in the IRA. It was a mission she barely survived, when a shipment of Semtex she intended to destroy before the IRA would distribute it to various cells exploded too soon. Nine people, including a man she’d come to love, died, and she carried the guilt for the rest of her career. Nearly three decades later, a dying soldier has a secret he wants to tell her, one that will change everything.

Thank you so much for stopping by, Phyllis. It was joy to have you, and I can’t wait to read my new copy of My Noble Enemy, which is sitting next to me as I type!