I don’t drink coffee. I don’t drink wine. I don’t even drink soda. And until now, yes, you guessed it: I don’t drink tea. But how can I be a self-proclaimed new Anglophile if I don’t embrace that most quintessential of British things, tea?

So I decided several times a week I would try a new type of tea, until I either a) found one I liked, or b) got used to drinking it and just kept doing so out of habit (hey, it worked for 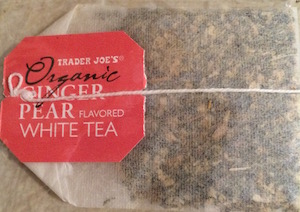 my years on caffeine-free Diet Coke). Luckily for me, my cousin Joy and childhood friend Heather were wholly supportive of this endeavor, and sent me tea samples. Like, LOTS of tea samples. I might be set for tea for the next six months. We shall see.

Each week, I shall report in on my adventures with tea. Week One’s choice? Trader Joe’s Ginger Pear White Tea. I like ginger. I like pear. And someone told me white tea was among the mildest of teas.

First thing learned: do not drink the tea too quickly after heating up the water. You will burn your lip (ouch). Second thing learned: tea still tastes like tea. Only this time, I’m appreciating the ginger/pear undertones, and also realizing
the warmth of the tea, as well as its taste, means I’m sipping it slowly. I have to savor it, in other words, whether I want to or not.

So I’d say Tea Day, Week 1 is a success. Sure, I’ve only tried one type, but I’m still drinking it!

How about you? Are you a tea fanatic? What are your favorite – and least favorite – types? Any tricks of the trade?