I recently had the privilege of attending the advance screening of Laurie Kahn’s Love Between The Covers documentary (which chronicles the romance community), as well as the day-long What Is Love?: Romance Fiction in the Digital Age conference. Both were sponsored by the Library of Congress and the Popular Romance Project. Both were free. Both were absolutely fantastic.

As a writer working toward publication, nothing feels more encouraging, more energizing, more inspiring, than sitting in a room full of people who are as enthusiastic about romance as I am – if not more so.

The documentary was amazing – I learned so much, and just delighted in seeing the community, authors, and books I love so well-represented on the screen. A Q&A with director Laurie Kahn and a number of the film’s featured personalities, including Eloisa James, Beverly Jenkins (who is a HOOT, y’all), Radclyffe, Elizabeth Essex, Joann Lockyer, and Kim Castillo followed the screening. The film was warmly received, and listening to the speakers afterward, fantastic. (Yes, I’m full of adjectives, but really, I cannot describe how immensely enjoyable this all was.) Please consider donating to the film; it needs more money for final production, so that it can be shared with the world.

The day-long conference featured four panels focusing on different questions/issues facing the romance community. Each panel had five to six commentators. The caliber of the conversation, both from the intelligent, erudite, and often hilarious commentators, as well as the insightful questions posed by the audience, was top-notch.

I note here my own limited take-away observations from the four panels. Luckily, each panel was filmed and will be available at the Library of Congress. I, like many others, tweeted salient, informational, or humorous (or all three!) points throughout the day under the hashtag #PopRom. Kiersten Krum storified these tweets (all 1100+ of them!), and you may find them here.

I attended this conference with my best friend, fellow writer Annika Keswick, so the nerves I might have had if I had attended solo were gone. But I needn’t have worried; at the documentary screening, we met several other women and struck up immediate conversations, even walking back to the metro with a fellow romance junkie, sharing stories along the way. The next morning at the conference, after choosing seats near the front (I wanted to see and hear well, and gawk at the romance celebrities, people), we met Regency author Elizabeth Johns, whom I learned also utilizes the enormously talented Tessa Shapcott for editing purposes. Ms. Johns also introduced me to Julie Cupp of Formatting Fairies, and offered other helpful advice regarding indie publishing. “A lot of people helped me,” she said as a reason behind her friendly, pay-it-forward attitude, an attitude discussed in the panels later on as a rather unique hallmark of the romance community. 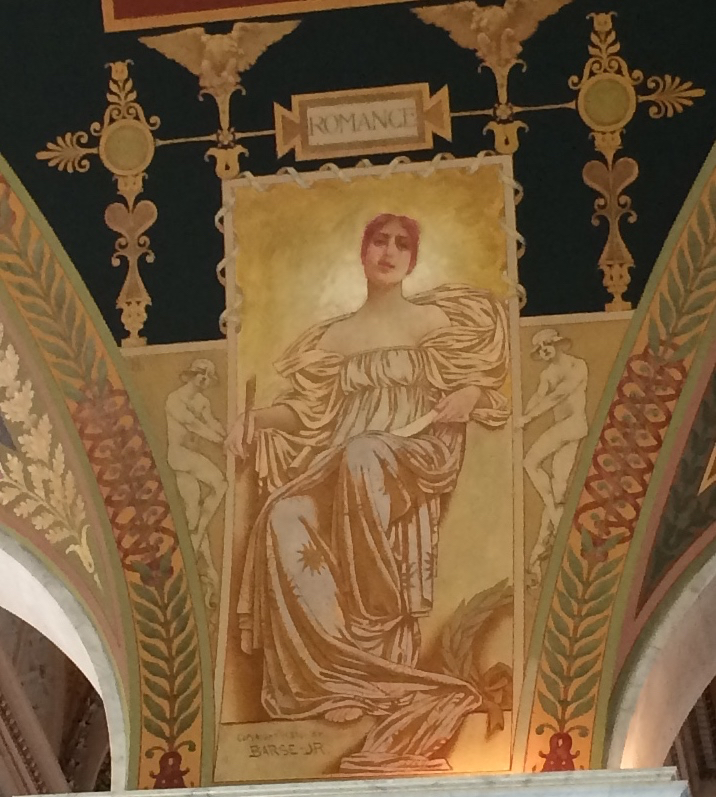 At lunch, my friend Annika and I scoured the cafeteria for an empty table. No luck. We asked to sit with a woman who was on her own, and again, immediately struck up a friendly conversation, discovering much in common and talking as if we’d known each other longer than a few minutes. Turns out we’d found Kathryn Barrett, a contemporary romance author. She, Annika, and I continued discussing the joys and challenges of writing as we briefly visited the painting of Romance and saw the Great Reading Room of the Library of Congress. When we returned to the meeting room for the second half of the day, we discovered she’d been sitting right behind us!

I also managed to work up the courage to ask Eloisa James for a photo with me. She was nothing but gracious, folks, a warm and welcoming lady who spoke so insightfully on many of the topics of the day (not that I was surprised). Spoke to the room, I mean, not to me – I was too star-struck to do more than grin like an idiot.

All in all, it was a spectacular day, chock full of great discussions, useful information, and wonderful people. Thank you so much to the Library of Congress and to the Popular Romance Project for putting on this program and hosting us all. Well done, and thank you to all who helped put on this marvelous production.

17 Replies to “What Is Love? / Love Between The Covers: One Romance Writer’s Adventures (meeting Eloisa James!) at the Library of Congress’ Popular Romance Project Conference”