Wait, what? It’s Wednesday again? HOORAY! We love Wednesdays, because that means it’s #WriterWednesday, and I get the opportunity and blessing to introduce you to another amazing writer.

Today, Kishan Paul joins us. Kishan is a romance author who’s wonderfully supportive of other authors (like me!). She dishes up romance and more in her novels and in her great newsletter (so consider signing up!).

So settle in with a cup of tea (and a blanket, if you’re here in Virginia – it’s cold and rainy. Again.), and enjoy learning a bit more about Kishan and her books!

Inspiration comes from many different places for me. Books and movies are the main culprits. The more emotional it is the better and music has that effect on me too. Sometimes it’s just the simple act of driving down a road with no one to talk to and no good music to listen to. 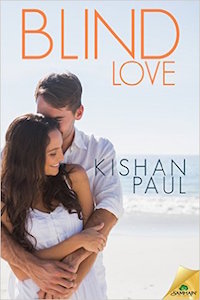 I am a sucker for a good romantic suspense. Books that make my heart race and leave me saying ‘One more chapter’ are my crack.

A symptom of a brain bleed is bruising under the eye and blood in the ear.

I’m really goofy and find humor in the craziest things.

When there’s a painful scene in my stories, I have to heal with my characters if that makes sense. I need to see that they’re okay before my heart can stop aching. So those painful scenes are the ones where I’m lost to the world until my characters are in better places.

A Bit on The Second Wife:

If you want to live, you must let go of the past…

Twenty-eight-year-old psychologist, Alisha Dimarchi, is abducted by an obsessed client and imprisoned in his Pakistani compound for over two years. Forced to change her name and live as his second wife, her life is filled with trauma and heartbreak. Thrust into a world of violence and oppression, Ally must fight not only to keep herself alive but to protect the lives of the people she now considers family. At night, she retreats into her memories of the only man she has ever loved—a man she believes no longer loves her.

Thirty-four-year-old handsome surgeon, David Dimarchi, has spent the last two years mourning the disappearance of his wife. After a painful and isolated existence, he begins the process of healing. It is then he is visited by a stranger, who informs him that Ally is very much alive and needs his help. In a desperate attempt to save her, David enlists the help of a mercenary. Together they find themselves in the center of more than just a rescue mission. Will he be able to reach her in time, and if he does, will she still want him?

Excerpt from The Second Wife:

Ally’s lungs were cement blocks heavy in her chest. Unable to breathe, she lay curled in a ball on the floor, gasping for air, drenched in sweat.

The panic attacks had started after Nasif’s first night away and progressively worsened each day. She wanted to pretend it was because he wasn’t there to distract her. But she knew better.

Sayeed would be here soon.

The gnawing voice in the back of her head wouldn’t stop reminding her of the hell his arrival would bring. As the day grew close, the voice became louder, urging her to do something. But there was only so much she could do locked away in a concrete box.

Unable to shut out the images or find a way to escape, hopelessness would again choke her, triggering another panic attack. Funny thing was, those episodes she spent struggling for air gave her a little hope. Maybe this one will kill me.

Something she knew better than to believe. After all, she’d spent her career teaching clients that panic attacks were typically non-life-threatening.

While this morning’s episode subsided, she stayed on the floor, slick with perspiration, staring at the ceiling.

He said Sayeed would be here in fourteen days.

Ally crawled beside the bed and dug under the mattress until her fingers wrapped around a thin, wooden pencil. After dragging the frame away from the wall, she slid between the headboard and concrete and sat on the floor. She added another tally mark to the twelve already there. Praying she’d counted wrong, she tapped the back of the eraser against each line and counted again. The end result was the same; Nasif had left thirteen times already. Her pencil slipped out of her shaky fingers and fell to the floor.

Images of Sayeed, violating her, flooded Ally’s thoughts. Her chest tightened and her body chilled. Time was running out. Her breathing became labored and a cool sweat beaded across her lip.

“No.” She covered her ears and shook it all away.

Whatever happens, I will survive.

A Bit About Kishan:

From daring escapes by tough women to chivalrous men swooping in to save the day, the creativity switch to Kishan Paul’s brain is always in the “on” position. If daydreaming stories were a college course, Kish would have graduated with honors.

Mother of two beautiful children, she has been married to her best friend for over seventeen years. With the help of supportive family and friends, she balances her family, a thriving counseling practice, and writing without sinking into insanity.

Want to connect further with Kishan? Find her here:

Thanks so much for joining us, Kishan! It was a delight having you.