After we left Hyde Park, we ambled our way back east along Piccadilly, marveling (at least I was) over the huge buildings and elaborate stonework carvings and sculptures we often saw. It was still hard to grasp I was walking on Piccadilly – such a famous street name, and there I was! We strolled past the Burlington Arcade (one of the first covered shopping areas, opened in 1819), Hatchards (the oldest bookstore in London, founded in 1797), and Fortnum & Mason (the Queen’s official grocer, established in 1707), but since it was Sunday morning, none of them were open. We did, however, pass Fortnum & Mason just as it was striking 9:00 a.m., so we got to see the famous clock and the two mechanized figures of Fortnum and Mason come out to greet each other on the hour. 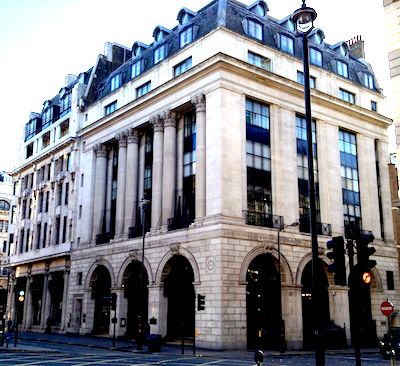 I paused as often as the husband would allow, snapping pictures and trying to imagine Regency bucks and debutantes walking along these same streets, entering these same buildings. I wondered also at how different it would have sounded – and smelled – to have had horse-drawn carriages rumbling through the streets; it was loud enough with modern cars and busses.

It wasn’t long until we ended up at Piccadilly Circus, which immediately had a different, much more modern feel, helped along of course by the big-screen digital billboards. It was a raucous hubbub of activity. It was delightful, although apparently I didn’t take any photos there! Of course later on in the trip when we walked through the area and it was much more crowded than that first Sunday morning, it was a little less inviting…

We kept moving forward and ended up at Leicester Square, the infamous Leicester Square (most definitely pronounced LES-ter, not LIE-ces-ter). Fodor’s had warned us this was a popular tourist spot and we should be on the look out for pick pockets, but at least on this gorgeous Sunday morning it was quite peaceful and calm and seemed rather small. It did also have a more “international” feel and we noted with dismay a number of American fast food staples such as Burger King and McDonalds.
My husband commented several times throughout our trip how rarely we seemed to hear native Brits speaking; what we mostly heard were a lot of foreign languages – German (which always catches my ear since I still understand much of it), French, some Asian languages, and of course other Americans. We decided this was mostly likely because we were in the Tourist Central part of London. We also noted often throughout our stay that most of the restaurant wait staff did not seem to be native to the country, either. It didn’t matter to us either way; it was just something we tuned in to. I don’t know if that’s because we ate at some rather casual places likely to pick up tourists (we’re not ones for fancy cuisine no matter where we are).

I knew we were quite close now to the Harold Pinter Theater, so even though we weren’t going to see the play Mojo until Tuesday night, I cajoled my husband into letting us stroll by and check it out. He even took a picture of me in front of Colin Morgan’s face. Woo hoo! (I’ve already blogged about my Mojo experience, if you want to skip ahead and read it.)

From Leicester Square we headed south to find Charing Cross. First we passed the well-known church St. Martin’s-in-the-Fields, whose bells were pealing merrily, calling all into Sunday worship. I wanted to zip over and peek inside, but decided I really didn’t want to disrupt those there for services, so we continued on…and stumbled into Trafalgar Square. And oh my, what a view!

The square was immense, and striking in its grandeur, with the huge statue of Nelson mounted high up on his column, the impressive facade of the National Gallery behind it, and looking out toward the Thames and Parliament in front.  I really loved this area – it felt vibrant and alive. I snapped a pic of the famous statue of George IV – the ruler who gave the Regency era its name, in that he served as Regent from 1811-1820 while his father was incapacitated. Prince George (“Prinny”) finally became King in 1820. 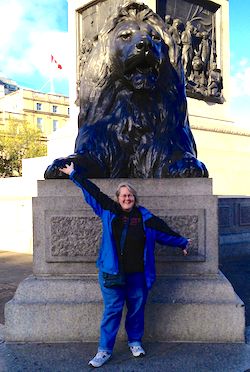 After admiring the large lion statues at the base of Nelson’s column (which reminded me fleetingly of the lions outside of the Art Institute of Chicago, which I visited as a child), we were examining the display map when a guard approached us. He seemed quintessentially stereotypically British – polite, helpful, and sans most of his teeth. I probably shouldn’t say that, but I found his thick accent and friendly manner quite charming, and he gave us lots of advice on how best to see London – including warning us NOT to pay for the double-decker bus tours, that they were rip-offs and we could see the same sites on regular busses (we’d already decided against the bus tour, but it was amusing how much he emphasized that. Sorry, British touring bus companies.).

By this point it was 10:00 a.m., and we could head to the London Pass office to pick up our London Passes (which allowed us free or discounted entry into a number of tourist attractions, and in which we’d also included Tube passes. I don’t know if this was the most cost-effective way to see London, especially since with our limited time and Regency-focused itinerary we weren’t able to get to lots of the sites, but hey, it was easy and took the anxiety out of some of the planning).

Passes in hand, we headed down for our first Tube ride, across the city over to the Tower of London. My basic observation of the Tube was it felt like the subways in Germany and DC and therefore familiar, and that anybody who actually was talking while in a Tube car (carriage?) was generally not speaking English. I’d heard that native Londoners don’t actually talk or acknowledge others on the Tube. This amused my husband and I as we tried to guess who were tourists and who were not.
And thus we arrived at the Tower tube station and walked out into the sunlight to see the famous and infamous Tower of London staring back at us. But that is a story for another blog…