Whew. We made it. We actually made it to LONDON!

Getting to fly in the economy plus section of the airplane was a nice bonus (somehow it was cheaper than economy!), but flights are always tough on us because we can’t sleep on airplanes. Heck, we can hardly sleep even when we’re nestled in our own beds at home. Still, we were delighted to actually arrive early at Heathrow and make it through customs and all that remarkably quickly. By about 6 a.m. we were already ensconced in a cab and making our way from the airport to Mayfair.

So what were our first impressions during that cab ride? Well, both of us commented on the distance between us and the driver, and the fact that there was a complete plexiglas wall separating us. No getting to know your cabbie here, I guess – which was just as well, considering how tired we were. It did feel slightly odd to be driving on the left side of the road, but given we were on a divided highway and all the lanes directly around us were flowing in the same direction, we quickly stopped noticing it. By and large we were surprised at how much everything looked…the same. Until we got closer to London and started to see bigger buildings – especially the large grand stone ones that suddenly had me feeling I’d stepped back into another era.

Although I had no clue at the time where we were, I did recognize Harrod’s as we drove past. Suddenly we were driving past Hyde Park and just as quickly we were there – the cab dropped us off in front of the Holiday Inn in Mayfair. Now I’ll grant you the Holiday Inn neither sounds nor looks Regency, of course. Many Americans teased us for staying in an American chain (at least I’ve assumed it’s American). And the outside of the hotel was, well, rather drab – although the inside was quite nicely furnished. But who cares? We were smack dab in the middle of Mayfair. The Green Park tube stop was literally about one minute away. London was all around us!

As it was far too early to check in – it was 7:00 a.m. on Sunday morning – we just dropped our luggage and, in spite of being tired, headed right out to explore. The minute we hit the streets I was completely energized again. I was in London, baby, and I didn’t want to waste a minute! Since it was also too early to go pick up the London Passes and tube tickets we’d ordered ahead of time, I grabbed my London map and we set out on foot. Luckily for us, the weather was absolutely beautiful – clear blue skies and just the hint of fall coolness in the air.

In spite of being awed by the large buildings all around me, the first place we actually headed to was… Green Park. And it was exactly that, lush and green, even in November. It was delightfully simple and serene. No big structures. Not many people around. I was rather amazed, actually, to find such a hushed spot in the middle of a huge city, especially when I knew it was so close to Buckingham Palace and other major notable spots. Hubby and I strolled leisurely, and I enjoyed snapping pictures. Then we found ourselves in front of the Palace. 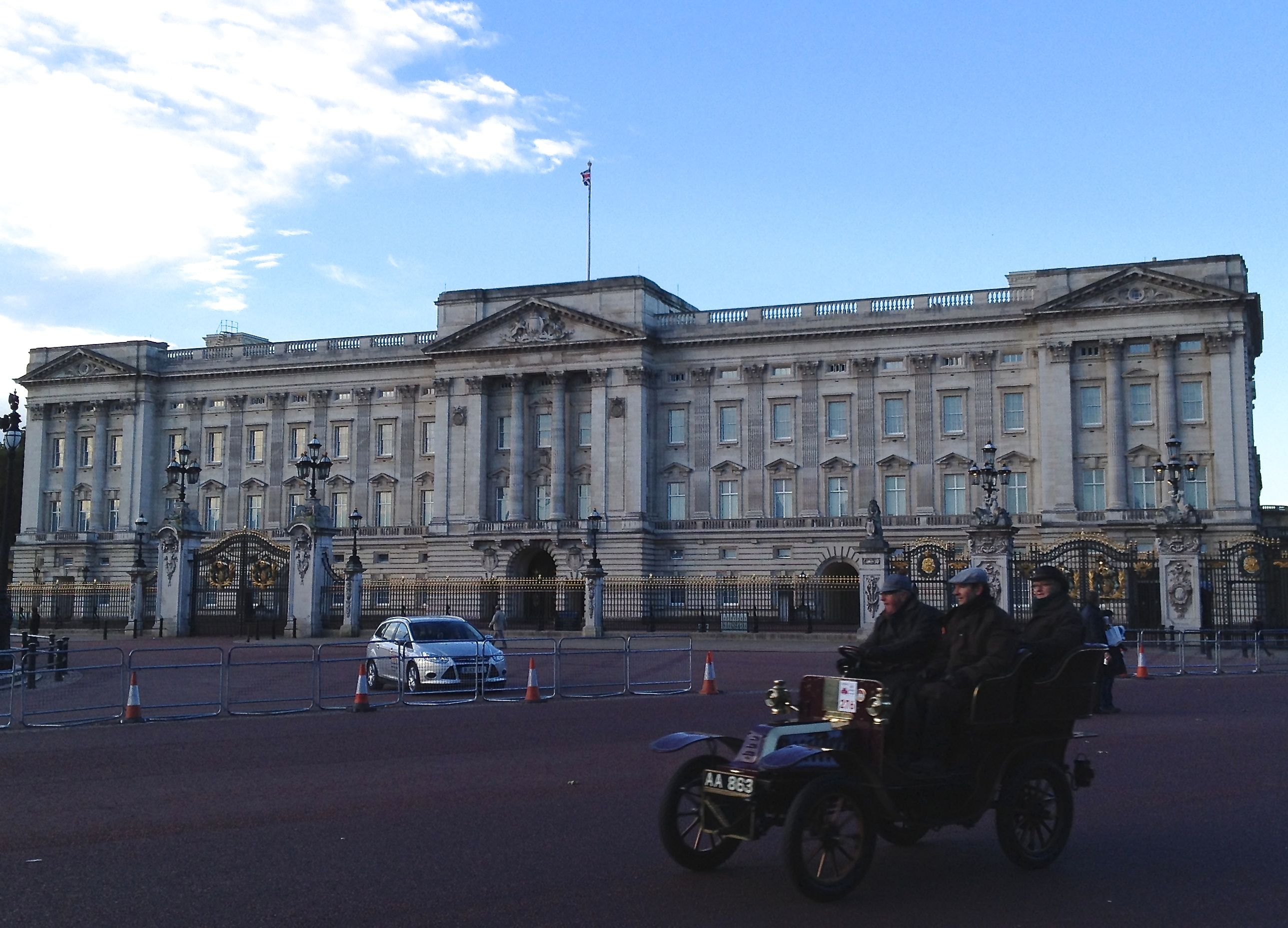 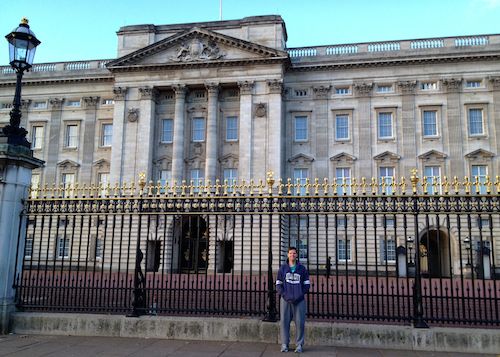 take in the magnitude and majesty of the building at our own pace. Which we did, although our view kept getting interrupted by old cars – really old cars – racing by in front of the palace. The variety of cars was amazing, and it was oddly amusing to watch them race pell-mell around Buckingham Palace at the end of Pall Mall (see what I did there?). Turns out we’d arrived on the day of the annual London to Brighton Veteran Car Run! 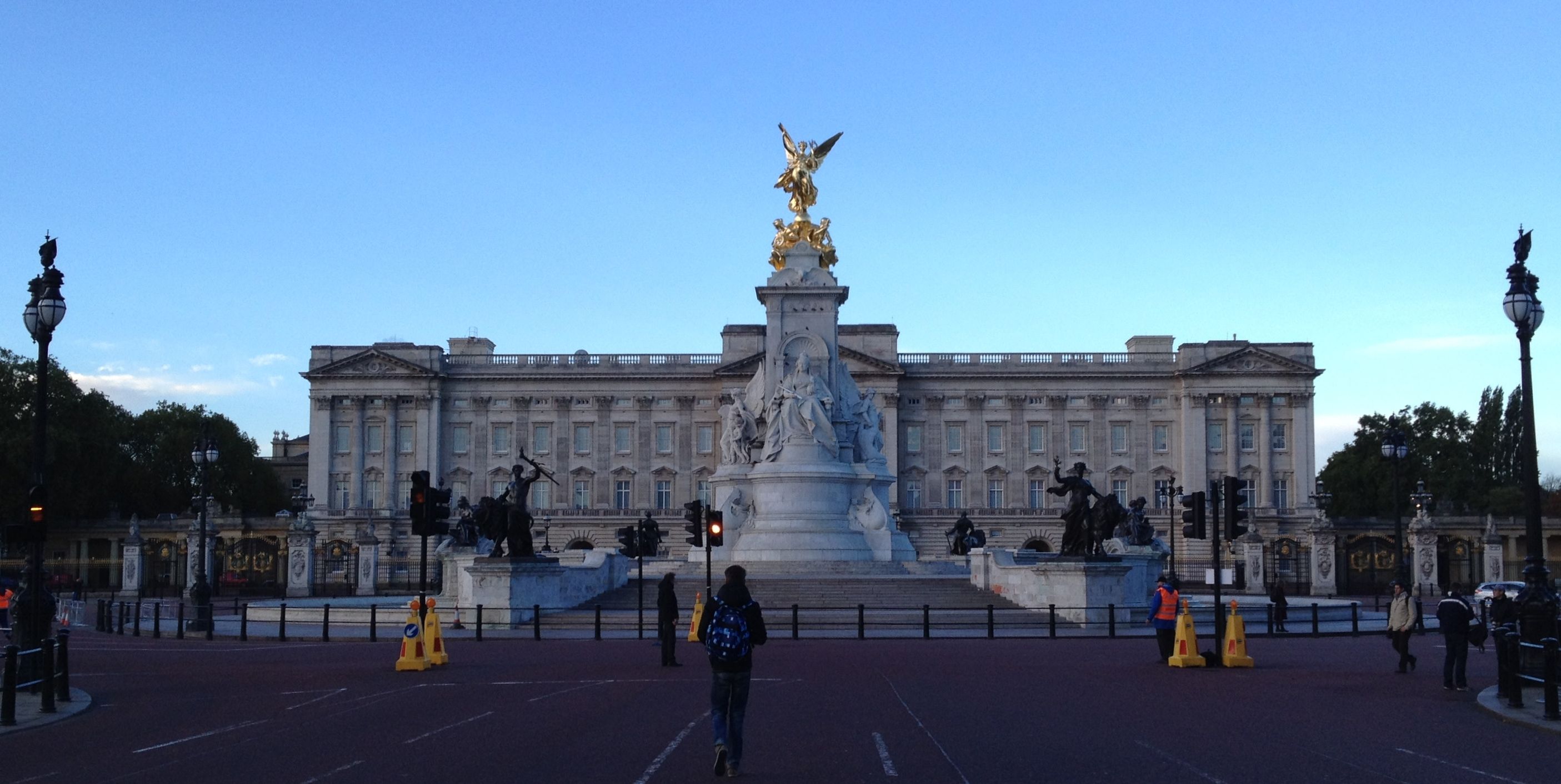 After a bit we decided to head up to the famous Hyde Park that appears in almost every Regency romance novel. I desperately wanted to see Rotten Row and the Serpentine – names familiar from books but of things I’d never seen. I still could hardly believe I was about to see them now – that I was in LONDON, and that all of these places were real, right in front of me!

We passed near the Wellington Arch, but couldn’t go under it, as that was the route the antique cars were taking. And then we were at Hyde Park corner. I could see Apsley House, home to Arthur Wellesley, the Duke of Wellington who triumphed over Napoleon at the Battle of Waterloo. I could see the park. I could see a large, gorgeous, white building that used to be St. George’s Hospital – a name I’m also sure I’d read about before.

I just wanted to stand and soak it all up. It was extraordinary – the sights, the sounds, the smells.

All the people. The old, majestic buildings lining the streets, occasionally interspersed with something more modern looking. I just can’t properly convey the feelings that were running through me at that moment. I’m pretty sure my husband’s main feeling was “tired”, but he gamely set out with me through the entrance into Hyde Park.

And then we were there. Walking along paths people have walked along for hundreds of years. Paths where numerous romantic trysts certainly occurred (perhaps just in fiction, but hey, what happens in Hyde Park stays in Hyde Park). I could see Rotten Row – THE Rotten Row (corrupted from Route de Roi, the route of the King). I stood for a moment, trying to imagine carriages and curricles making their way up and down the path as the ton did 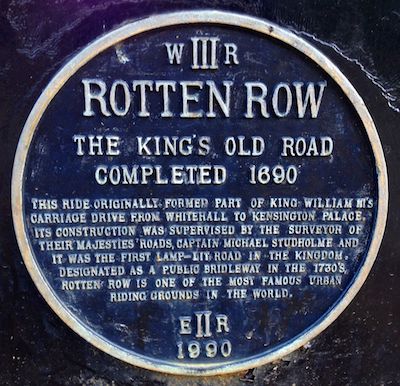 their version of “scooping the loop” back at the beginning of the 19th century. It was the place to see and be seen. In the 21st century, what Rotten Row and the sidewalk path next to it mostly had was… runners. Lots and lots of people running along the pathways for exercise. Which made sense – if you’re going to work out, why not pick a gorgeous and relatively quiet park with well-laid out paths to do so? Still, I couldn’t help giggling a little, wondering what promenading members of the peerage would have made of today’s fitness buffs. 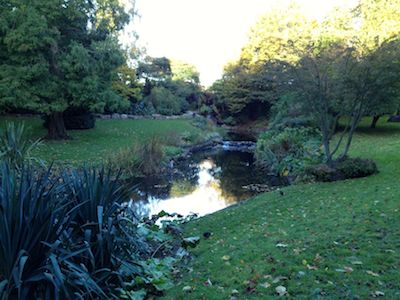 Hyde Park is big. Bigger than I had expected (odd, that, since everything else was closer than I had expected. I guess that’s the challenge of trying to experience something through a 2D map). While I had this desire to explore each and every inch of it, truth be told I knew it was only early morning on what was bound to be a long day with LOTS of walking, and I wanted to save my feet a bit for exploring the city. So we strolled as far as the edge of the Serpentine, and then meandered back to Piccadilly. I thought we might get back to Hyde Park later in the week, but we didn’t. In hindsight I do wish I’d explored the park a bit more – but in reality, I wish I’d explored EVERYTHING a bit more, and we only had so much time…