“There once was a man from Nantucket…”

“Once Upon A Midnight Dreary…”

“Oh, Sally Sue, I love you true,
My love is never ending.
That you and I and Phil and Stu…”

“‘Twas once a time ago I thought I felt
A glimmering of love so true for you.
Beneath your tender gaze, I thought I’d melt,
Right down into a big green pile of goo…”

“So that night that you and I, like, got totally drunk and smashed face and stuff? That was the Best. Night. Ever. Could we, uh, totally do it again?”

Not exactly poetry. But truth.

“Roses are red, violets are blue,
Never again do I want to see you.”

Crap. Figures. She’s a better poet than I.

We had 150 (+/- 10) words to draft a story inspired in some way by this week’s book:  Douglas Adams’ wacky scifi classic, The Hitchhiker’s Guide to the Galaxy, in which the rather ordinary but not overly eager to be annihilated human Arthur Dent is swept away on galactic adventures.

Not claiming this is my Best. Work. Ever, but after missing last week, I just couldn’t stomach the idea of not writing this week – even though I’m eyebrows deep in edits for A Matter of Time. Of the story element choices below, I picked “the worst poet in the universe,” and “foolishness/miscommunication.” Though in hindsight, I’m wishing I’d worked the number 42 in there somewhere…

Story elements (base your story on any TWO of these elements; be sure to tell us which two you chose. Reminder: please remember the Flash! Friday guidelines with regard to content; and remember please do not use copyrighted characters).

* Conflict: man v man (not gender or species specific)
* Character (choose at least one): an ordinary person swept away on an epic adventure; a depressed robot; the worst poet in the universe; a charismatic hedonistic narcissist; a professional hitchhiker
* Theme (choose one): satire, foolishness, science, adventure, miscommunication
* Setting (choose one): a house about to be bulldozed; a spaceship; an odd restaurant

Take an epic adventure yourself on over to Flash Friday Fiction, and read (and perhaps comment) on some of the other amazing flash stories – or, you know, like, totally craft one of your own!!!

How can she not love me? Am I not manly enough? Do these guns not bring all the girls to my yard? Is she not impressed by the size of my … thighs?

Every day, I don this cape, save this city, and what do I get in return? Nothing. Barely a glance, rarely a nod, those magnificent eyes always sweeping past me to something — someone? — beyond.

I could best Superman in strength, Spiderman in dexterity, the Hulk in armwrestling. She doesn’t care.

Let Captain America have his shield, Batman his Batmobile, Ironman his ridiculous suit. I’m greater than all of them combined.

And yet, she’s captured me as if with that blasted lasso, this Wonder Woman.

Ha. As if that’d ever be enough.

Robin says Cheetah’s more than an archenemy to her. Liar. He just wants in my tights.

As I want in hers.

After an accidental week’s hiatus (life happens), I’m back with my tale of exactly 150 words (as required).

“This week’s novel inspiration, reaching far, far back in time: The Iliad, Homer’s 3,000-year-old epic tale of the spectacular clash of gods and heroes surrounding the fall of the city of Troy.

Story elements (base your story on any TWO of these elements; be sure to tell us which two you chose. Reminder: please remember the Flash! Friday guidelines with regard to content).

* Conflict: man v man (not gender specific)
* Character (choose one): a prideful superhero, a hot-tempered king, a mighty warrior, a soothsayer, the most beautiful woman in the world, the kidnapped daughter of a priest
* Theme (choose one): the glory of war, mortality, fate vs free will, friendship
* Setting: a besieged city

OPTIONAL PHOTO PROMPT (for inspiration only; it is NOT REQUIRED for your story)”

I went with conflict (kind of), character (prideful superhero, most beautiful woman in the world), and theme (friendship).

What do you think? 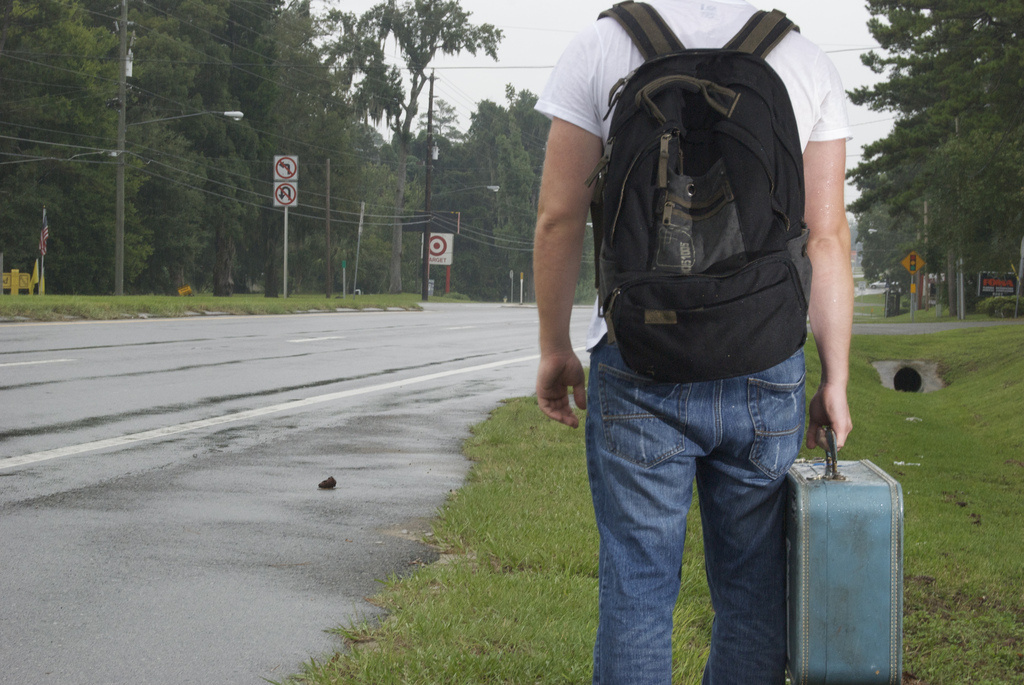 “Why did the chicken cross the road?” you wise-asses always joke.

No one ever asks about the rooster. No, forget the bloody rooster. I’m just comic relief, providing nicknames for male genitalia, supplying funny sounds for children to imitate (no self-respecting rooster actually SAYS cock-a-doodle-doo; don’t you people listen?), strutting my way around the henhouse. So you think.

Cockerel, I tell you.

Do you know what I do in my off time? It’s all subterfuge, sitting high on this fence day after day, pretending to guard those ridiculous hens below. They’d never leave the yard if given the chance. Scaredy cats. Oh, wait. Wrong species.

It’s a dog-eat-dog world, and I ain’t goin’ down with the chicken livers. They ain’t making no capon of me.

“A journey of a thousand miles begins with a single step.”

So I’m off to Hollywood, to lights, stardom, fame, acclaim. If that idiot Foghorn Leghorn can succeed, I’m a shoe-in.

As soon as I figure out how to get across this road.

This week’s novel inspiration: Canterbury Tales, Geoffrey Chaucer’s bitingly clever collection of tales by a colorful troupe of pilgrims — as a contest, no less, with a free dinner as the prize.

I chose character (talking rooster, obvs), theme (subterfuge), and setting (a long road en route to a shrine – because Hollywood’s a shrine, right?), and stuffed them all into a story fitting the limits of 190-210 words.

What do you think? Is my tail (er, I mean tale) anything to crow about?

Cockeral waltz your way on over to Flash Friday Fiction to check out the other stories, comment, or maybe add one of your own!

I was jealous. Damn jealous. Wanting the gold to myself. Wanting to wrap myself in it, luxuriate in its weight, let those baubles trickle through my fingers.

But no. It was you. Always you. You got the dresses, the earrings, the fame. I was merely background, my sober demeanor matching my black and white formalwear.

Am I not pretty? Is my hair not as perfectly coiffed as yours, Brilliantine securing its rippling waves? My eyebrows have not your arch, I concede, but my lipgloss catches the light better than your matte finish.

I wanted to garb myself in flowing robes of glittering delight, to paint my face all the colors of the rainbow, to revel in the beauty of my own fine form.

The closest I got was embracing you.

Why else do you think I married you?

I didn’t want your body, darling.

I wanted your closet.

Story elements (base your story on any TWO of these elements; be sure to tell us which two you chose. Reminder: please do not use copyrighted characters).

I chose character (jealous husband) and theme (obsession, and prohibition, of a sort), for this week’s tiny tale. Stories had to be between 100-150 words. What do you think of my silly offering?

Please style your way on over to Flash Friday Fiction to check out the other entries, and perhaps leave a comment or two for the very talented writers there!

“There’s a ghost in there.”

“Better not. Or I’ll tell your mom about the time you peed in the vent and blamed the cat.”

“That’s what I thought. Wanna go in?”

“Yeah, there might also be treasure. C’mon, ya chicken.”

“I don’t feel so good about this. I … I think something just touched me.”

“Geez, I was just kidding. Calm down.”

“I swear, there’s nothing in here.”

“What do you mean, something’s got you?”

“OhmyGodohmyGodohmyGod. I … I … swear on my mother’s grave, I’ll … I’ll do whatever you want. I’ll go to church every Sunday. I’ll help old ladies cross the street. I’ll …”

“… Do your brother’s chores for the next six months?”

“I am the ghost of Frankie Past!”

“Aaaaaaaaaa! I’m getting out of here!”

“Here’s that twenty bucks I promised. Totally worth it.”

This week’s novel inspiration: Hound of the Baskervilles, Arthur Conan Doyle’s tale starring celebrated detective Sherlock Holmes, who uses his (arrogant) genius to solve murders against a backdrop of a legendary, terrifying hellhound.

Story elements (base your story on any TWO of these elements; be sure to tell us which two you chose. Reminder: please do not use copyrighted characters).

We got 240-260 words to tell our story, based on at least two of the story elements listed above. I chose conflict, theme, AND setting. I wanted to write a story that was entirely dialog. This one, I guess, is 95% so, since I offered some stage direction. What do you think?